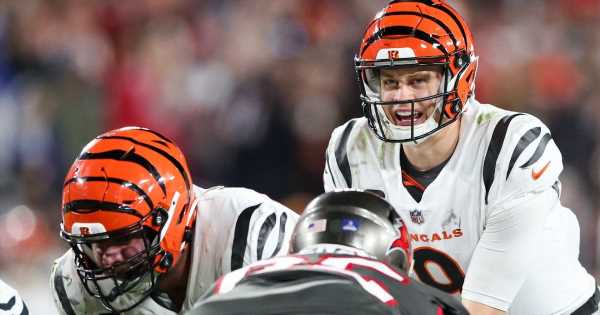 With the Super Bowl in their sights, the Cincinnati Bengals are on a tear at the right time for fans and sports bettors in Ohio.

Legal sports wagering kicks off on Jan. 1 in the state, perfect timing for bettors wanting to put money on the red-hot Cincinnati Bengals. The Bengals play the Buffalo Bills on Monday, Jan. 2 and the the best Ohio online sportsbooks will be hopping with activity.

At FanDuel, the odds for the Cincinnati Bengals to win this season’s Super Bowl are +750, only behind the Buffalo Bills, Philadelphia Eagles, Kansas Chiefs and San Francisco 49ers.

Since Nov. 6, the Cincinnati Bengals (10-4) have won six straight games, angling for a repeat of last season’s Super Bowl appearance — but with a hoped-for better outcome. The Bengals lost that Super Bowl in a 23-20 comeback victory to the NFC’s Los Angeles Rams, played by coincidence on the Rams’ home field.

This season, the Bengals have the ingredients to win the Vince Lombardi Trophy. The next Super Bowl is Feb. 12 at State Farm Stadium in Glendale, Arizona.

A title run by the Bengals would rev up Ohio bettors eager to wager legally on sports. Week to week, NFL games — and especially the Super Bowl — are the most heavily wagered events in the country.

Caesars Ohio Sportsbook has the Bengals at +750 to win the Super Bowl.

Members of the Who Dey Nation are confident the Cincinnati Bengals can bring the Lombardi Trophy home to the Queen City.

Reason No. 1: The Bengals are Peaking at the Right Time.

Heading into play over the Christmas holiday weekend, the Bengals are in the midst of the longest winning streak in the AFC, at six games. The NFC’s San Francisco 49ers (10-4) have the league’s longest streak, with seven straight wins.

Cincinnati reached that AFC-leading total after a 4-4 start.

The six-game streak includes wins over opponents led by two of the NFL’s best quarterbacks — the Kansas City Chiefs’ Patrick Mahomes and Tom Brady of the Tampa Bay Buccaneers.

Reason No. 2: The Bengals are Good vs. Teams They Need to Beat

In building their impressive record, which leads AFL North, the Cincinnati Bengals have beaten teams they might face on their playoff path to the league title. These teams include the Tennessee Titans, Kansas City Chiefs, Miami Dolphins and Tampa Bay Buccaneers.

Those wins can be a confidence booster as we advance.

In losses this season to the Dallas Cowboys and Baltimore Ravens, also considered title contenders, the Bengals have played well and kept the games close.

With three games remaining this season, Cincinnati has a chance to claim the AFC’s No. 1 seed.

First, the Bengals would have to win their final three games — on Dec. 24 at New England and season-ending home games in January against Buffalo and Baltimore.

With these three wins, the Bengals would need Kansas City to lose one of its final three games. The Chiefs close out their regular season with home games against Seattle and Denver and then a final matchup in Las Vegas against the Raiders, a longtime rival.

BetMGM Ohio App has the Bengals +400 to win the AFC.

The X factor that could take the Bengals to the top is the confident leadership of star quarterback Joe Burrow, now in his third NFL season, all with Cincinnati.

Burrow’s statistics speak volumes. He ranks fourth in the league in passing yardage, with 3,885, placing him only behind Mahomes, Justin Herbert and Brady. Burrow has more passing touchdowns (31) than any quarterback in the league except Mahomes (35).

In addition to these stats, Burrow is a proven winner who, during his collegiate years, guided an undefeated LSU team to the 2020 national title on his way to winning the Heisman Trophy.

Burrow knows how to win big games and can do it again this year.

Burrow is in the Top 5 favorites to win the NFL MVP, check out the best Ohio sports betting bonuses to get the best odds on him.

How much would it cost to buy the Cincinnati Bengals?

The value of the Cincinnati Bengals is $3 billion, according to Statista. Bengals owner Michael Brown bought the team in 1976 for $7.5 million. The Dallas Cowboys are regarded as the most valuable franchise, at $8 billion. Others: the Pittsburgh Steelers ($4 billion), Minnesota Vikings ($3.9 billion), Cleveland Browns ($3.9 billion) and New Orleans Saints ($3.6 billion).

Who is hurt for the Cincinnati Bengals?

Recent injured Bengals players include defensive end Trey Hendrickson (wrist), tight end Hayden Hurst (calf), Sam Hubbard (calf), cornerbacks Cam Taylor-Britt (shoulder), Mike Hilton (knee) and Jalen Davis (thumb) and receiver Tee Higgins (hamstring). Their injuries could keep these players sidelined for varying lengths of time, though it is unclear whether it will keep them out of the NFL playoffs.

What do Cincinnati Bengals fans say?

Why is the team called the Cincinnati Bengals?

In 1937, a professional football team in Cincinnati was first called the Bengals. In the 1960s, when the American Football League gave former Cleveland Browns head coach Paul Brown authority t to create a team in Cincinnati, he selected the name “Bengals” in honor of former Cincinnati teams that once used that name.

How did the Cincinnati Bengals get Who Dey?

According to some sources, the name sprang up in the stands in the early 1980s, spontaneously and spread. Others say Cincinnati Bengals fans coined variations of the New Orleans Saints “Who Dat?” chant originating from a New Orleans high school. Another version is the Who Dey? chant started when the Hudepohl beer salesman in the stands shouted “Hudy!” drawing a “Hudy!” (or “Who Dey!”) reply from fans.

What is the Cincinnati Bengals Division?

The Cincinnati Bengals play in the AFC North with the state-rival Cleveland Browns, coached by Kevin Stefanski, the Ravens, coached by John Harbaugh and the Pittsburgh Steelers, coached by Mike Tomlin.