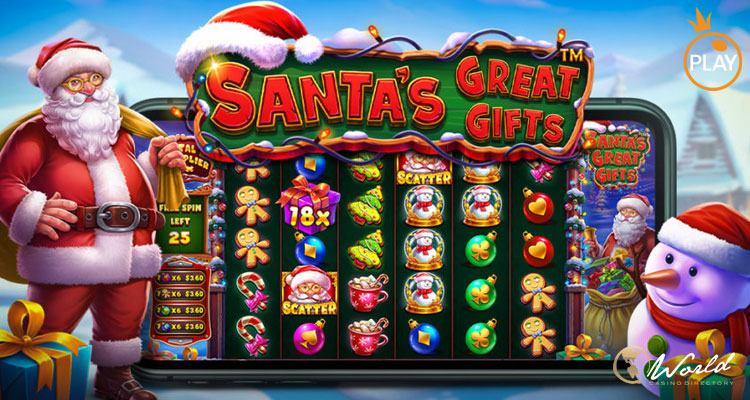 True to its title, the game’s main theme is Santa Claus and of course his bag full of presents. In the background is a winter scene of snow, gifts, and trees. Also, there’s a seasonal soundtrack, which makes everything even more magical.

To win, players must form matching combinations of at least eight scatter symbols, which appear anywhere on the board on the new dynamic 6×5 grid.

The game’s volatility is in the highest range, with an RTP of 96.25% which changes to 96.23% when the player activates the Ante Bet feature. The player’s paid spins can be gambled on for 20 p/c to 100 eur/$ per spin, increasing by an extra 25% when the Ante Bet feature is activated. If the player does this, his chance to trigger the free spins is doubled!

The key features of this slot are:

The Tumble feature removes the winning symbols from the reels and replaces them with new ones making room for additional wins to come later.

The feature that relates to the total spin win is the multiplier symbols feature, aka presents. They can appear randomly on the board and their value is from 2x to 100x a player’s bet.

The Extra Spins feature starts when the player makes a combination of 4, 5 or 6 scatter symbols, which automatically triggers 10, 15 or 20 free spins and is worth 3x, 5x and 100x a player’s bet. This round has four levels:

Also, collecting three or more scatters throughout the round awards +5 extra free spins!

Irina Cornides, COO at Pragmatic Play, said: “Santa’s Great GiftTM features a popular Christmas theme, but packs a host of innovative elements to keep players engaged, regardless of the time of year.

“The slot’s progressive features allow players to unlock multipliers in the free spins round and builds upon the fan favourite cluster style gameplay to deliver spirited festive cheer.”