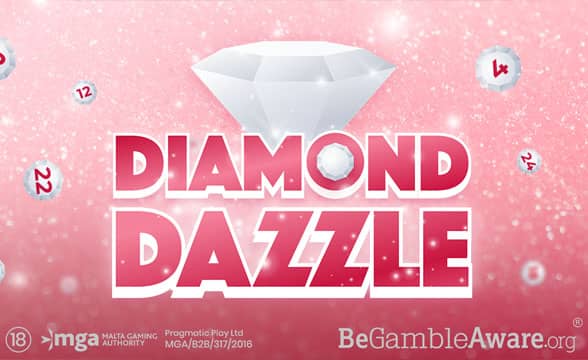 Pragmatic Play, a leading iGaming content provider, has enhanced its content portfolio with a brand-new game. Quoting the company, its new title will be called Diamond Dazzle Bingo and will take Pragmatic Play’s full house to the next level.

Diamond Dazzle Bingo is a brand new 90-ball bingo game that is sure to excite players who love bingo. What makes the new title different from other similar products on the market, however, is the unique Diamond Dazzle feature.

Pragmatic Play explained that there will be up to four prizes to be won each round. At the beginning of a new Diamond Dazzle game, the diamonds will show numbers from 1 to 24. Once the game kicks off, the values of the diamonds will be revealed one by one, after which the diamond will disappear.

The Diamond Dazzle feature will occur when a player wins a Full House. At that point, they will be presented with an evaluation for the 25th diamond, which will depend on the numbers called in-game and the number of diamonds remaining. At that point, players can either accept the value offered by the diamond or decline it in hopes of getting a bigger reward down the line.

If that doesn’t sound exciting enough, players who have staked in the jackpot-winning game are eligible to join the Diamond Dazzle Jackpot Game and play for a share of the jackpot. The latter is shared between the Full House winner/s who will take back home half of the money. The remaining 50% will be distributed among players who bought tickets into the game and guessed the same as the full house winner.

The New Game Makes the Viewers a Part of the Action

Pragmatic Play’s vice president of bingo, Claire McDaid, spoke about the new game. She called Diamond Dazzle Bingo an experience that is familiar enough for bingo fans to enjoy, yet exciting enough to “pack a punch” and engage players. McDaid added that the community jackpot feature will make even spectators involved, allowing them to win rewards.

Introducing the Diamond Dazzle community jackpot feature strategically means that spectators get that extra chance of winning even when the 1L, 2L and FH prizes have already been won. This gives the voting element of the game that extra sparkle.

Pragmatic Play is one of the powerhouses in iGaming. The company has an impressive pipeline and produces up to seven slots a month while supporting a range of other exciting online offerings. The company just inked new agreements with JK Bet and BetBaster, expanding its presence in Brazil.