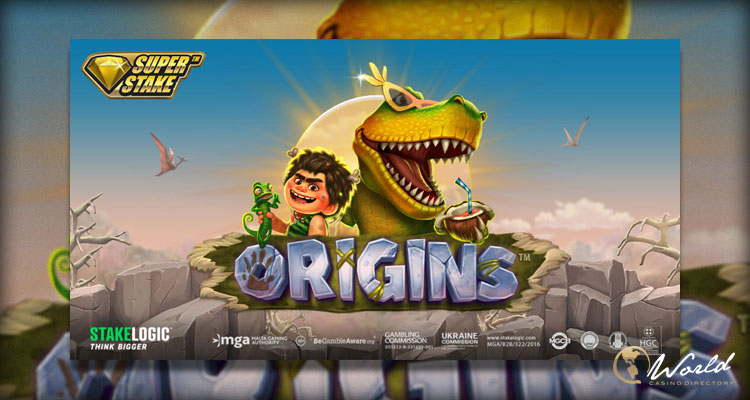 In its latest slot release, Stakelogic, a leading Malta-based iGaming provider, takes players to the dawn of time where dinosaurs roamed free and everything was made of stones, rocks and bones. The slot is titled, Origins and is equipped with 243 winning ways.

However, Stakelogic gives it its own twist, making a game that shows the humorous side of prehistoric times!

True to its title, the main theme of the game are dinosaurs, cavemen, a cavewomen and a prehistoric desert full of bones, rocks and sand.

To win, players must form matching combinations of paying symbols and there are 9 of them in total, starting from the left side of the reels, across at least three consecutive reels on the new, dynamic 5×3 grid.

The game’s volatility is in the medium/high range, with a theoretical RTP of 96%, which supposedly remains the same when the Super Stake or Buy Free Spins feature is triggered.

The player’s paid spins can be gambled on for 20 p/c to 20 $/eur when the Super Stake feature is triggered, which means that the regular stake is doubled and the chance to activate the Free Spins and Super Hold feature is also doubled!

The main task of Wilds is to replace all symbols except the Scatters or Collector symbols.

Free Spins with Chosen Symbols – this feature is triggered when 3, 4 or 5 Scatters land and this bonus round consists of 10, 15 or 20 free spins, individually. Before the round begins, one normal symbol is randomly chosen to be the Chosen Symbol. When the Chosen Symbol appear, it shows a money value, although they can still be used for ways to win.

If the opportunity arises, players can Buy Free Spins. For 100x, 200x or 300x a player’s bet, the player can buy 10, 15 or 20 Free Spins individually. Furthermore, there’s an option for players to pay 150x to rwin one of these options at random!

Olga Bajela, CCO at Stakelogic, said: “Origins takes players back in time to the dawn of man where terrifying beasts and big wins roam across the reels in this visually striking, heavily animated video slot.

“The bold visuals are combined with even bolder gameplay that includes a Super Hold feature, Free Spins, Multipliers and our ground-breaking Super Stake. This is a slot that roars with action and big win potential, and we can wait to see players journey back in time with Origins.”